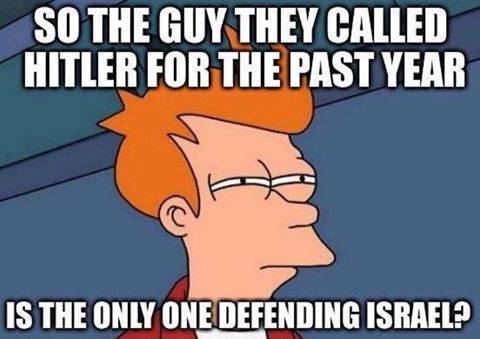 For those interested in the Middle East, thought I’d share what is being shared by the followers of the Purloiner Elect.

Just as they consider their current values reflected in the legislative acts that Lincoln undertook e.g. we’re not racist because Lincoln was a Republican[1]…with no historical understanding (or curiosity) about the inversion of those values to the point of their present nonexistence[2] – in fact ignoring or lauding the outright promotion of particularly racially divisive gerrymandering and voting restrictions which largely impact the poor and minority populations. [3] But hell, Lincoln freed the slaves…

They draw no correlation between the current treatment of Palestinians, amongst others, e.g. the vilification, blame and demonising of all Muslims – and the historic treatment of the Jews.[4] Islamic terrorism’s despicable acts seem to justify the turning of a blind eye to the larger scale, decades long, injustices[5] (it’s a bottle of wine discussion in terms of them looking at, questioning, understanding their own behaviour[6]). I don’t recall a similar response when it was the Irish carrying out the same sort of attacks (even when I first arrived here this was still ongoing).[7]

This kind of rhetoric is already empowering Israel to move forward on the building of further illegal settlements. They know that they have the blind support of the amoral imbecile who will be moving into the White House 21st January.[8]

Please don’t move to a NIMBY position.[9] This issue is just one of many in which the scales of reason, justice and morality have been tipped even further in the wrong direction. The environment. Women’s rights. Human rights.

This flagrant misrepresentation of history and the dismissal of any information which disputes their view – is not being shared.

The excerpt on the video link is the opening statement by the ‘expert’ who presents this bile.